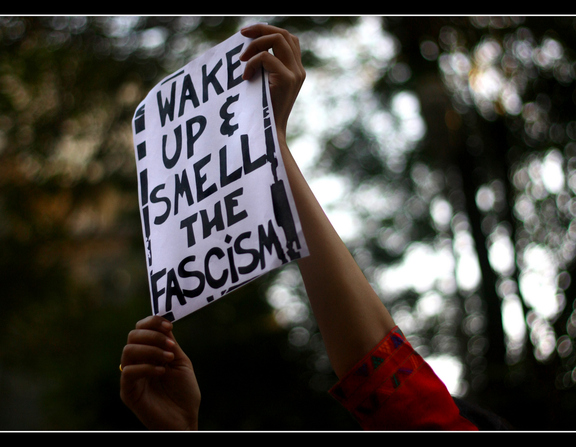 Fascism has taken over the world. At least according to Kramberger, the storyteller and the main character of Basara's latest novel Mein Kampf, which unreservedly criticizes and condemns modern variations of Fascism in Serbia, although "elements of Fascism can be found in every nation." He holds the entire Serbian political system at gunpoint, whose different sides all unite under the common prefix after the fall of the former regime. There is no change, another totalitarian system comes under the guise of democracy instead, and the people does not recognize the deceit of 'multi-party dictatorship'.

Serbian nation is simultaneously the executioner and the victim because "the historical meaning of Serbian national doctrine and the Serbian state constitute genocide of Serbian people." This intra-Serbian Fascism coincides with a caste system gone topsy-turvy, where shudras turn to brahmans, and pariahs are still untouchable, but in a completely different way. That is the modern social and political reality in Serbia, criticized by the author himself through the voice of Kramberger.

The title of the novel is daring, but also astonishing. At first, it is not very clear why Svetislav Basara chose to name his novel after the most controversial book of the 20th century, but it is conceived as an image of Serbian Fascism, so the title is perfectly fitting in the end. Kramberger (Basara) writes a new, anti-fascist Mein Kampf to bury the Nazism from the original in the "depths of the collective unconscious."

The framework for Basara's harsh indictment of Fascism is a simple plot whose structure is subordinate to anti-fascist discourse which is the most remarkable characteristic in the novel. In an over-crowded hospital room, Kramberger waits to get his discus cherniae treated, and spends time talking to Aprcović, who is severely ill with prostate cancer. The dialogue between the two patients dominates all other parts of the text and clearly states the authors disgust with Serbian fascist legacy. One of the symbols of the perverted political system has infiltrated that very hospital room, although he is healthy. Drempetić is that "one-cell organism" of Serbian Fascism who, thanks to his brown nosing and connections, has been able to nest where he does not belong. He is only one of many sub-species of upstarts that Kramberger thoroughly despises, and that is why there are several fights between the two.

Drempetić has been treated lightly in comparison to the fury the storyteller unleashes at the agents of fascist ideology in Serbia. His half-monologues explicitly condemn nationalistic figures, calling them by name and awarding them derogatory attributes. The Great Satan (Dobrica Ćosić), and Doctor Mengele of Law (Vojislav Koštunica), are the most exposed to the anti-fascist weapons fire of Basara's narrator, who does not leave out neither Vuk Karadžić, nor the current Gauleiter of the Serbian Weimar Republic (Boris Tadić). Kramberger's pamphlet-like discourse comes across as social and political satire without establishing a time distance, which will certainly irritate (and already has irritated) the ghosts of Drempetić's lookalikes.

Basara finds fascism in every pore of Serbian society, from tourism, pharmaceutical companies and monetary policy to art. The author draws interesting and witty parallels between current social phenomena and manifestations of fascism. The link between the ban on smoking and concentration camps, for instance, is not as naive as it seems. Fascism also persists in health, moreover, health and its institutions are fortifications of modern fascism. Kramberger does not shudder away from openly criticizing Christianity and the Orthodox Church tradition, where he observes some of the foundations of today's fascism.

The narrative voice is aware of its own Fascism, because he considers fascists to be a lower breed and the fact that "it is easy to be an anti-fascist after defeating Fascism." Kramberger sees himself as a Nazi in "a state of redemption, in a sickening process of de-Nazification."

Escape from the pressure cooker

Spiritual and theological discourse of Kramberger's neighbour Aprcović presents the other side of the novel that strives towards the spiritual, or is spiritual by default in its aspiration. Aprcović wants to see the end of the world – the metastases of Fascism will lead to the collapse of the entire system, and he wants to witness the final defeat of self-destructive Fascism. That is the sole motive of his fight in the higher dimensions. Fascism annihilates the little that we have of the three dimensions, and spirituality is sacrificed for a better life. However, spirituality is the only advantage of the Serbian Weimar Republic that the author recognizes in relation to the rest of Europe. Then again, for individuals "the trouble is that they are under great pressure to fit into the nation, the pressure cooker-nation." Therefore, their fight is futile, and their battles long lost.

Svetislav Basara dissects with sharp wit the collective unconscious of the Serbian nation and politics that have been poisoned by Fascism. Apart from identifying fascists and occasional funny descriptions, the text also has many autobiographic elements. The character of Kramberger is largely based on the author, which is apparent given the fierceness with which he attacks Fascist ideology. Basara uses exaggeration and repetition of certain phrases to draw Fascism closer to absurdity, and patched-up German (Nazi) names of Serbian state bodies and political figures provide an additional boost to that effect. The function of Basara's political novel is obvious, to expose Serbian Fascism and its roots, but from a literary point of view, the text is not that interesting. Literature here serves as a medium, for Basara to act politically (an to a certain extent, spiritually).

Despite the pragmatism, the anti-fascist Mein Kampf is not a mere pamphlet, because its mission is not restrictive. Basara allows occasional narrative outskirts to develop, and he also carefully constructs his characters, who, each in their own way, fights for their lebensraum in Room Four, at the Neurology ward. Basara and his characters, Kramberger and Aprcović, are aware how futile their resistance is, but therein lies their victory.