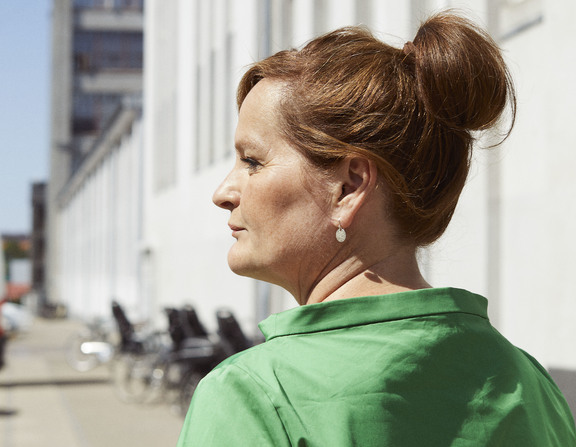 You mostly write short fiction, though you are well-known for your novels also. Can you comment on the difference between your approaches to the two? What is it about the shortness of the form that you find so appealing?


I started my writing career by writing three novels and then a fellow writer told me that he thought that I’d have a talent for the short form. I tried it and to my own surprise, it added some strength to my voice. I would say that the sense of “voice” and “presence” is especially strong in the short story. You have to be so precise, so “to the point”, so present, and so tuned in to the musicality of the text. The same of course goes for the novel, yet it feels less driven by voice and presence for me. The larger narrative takes the edge of the extreme presence that gives the short story such an energy. On the other hand, there are psychological themes that I find interesting to touch upon in the short story that I in a novel would have much more time to investigate. I love both forms. I have written four novels, two novellas (short novels), and two short story collections. My guess is that I will continue to fly from form to form (like a honeybee!)

I don’t know much about contemporary Danish literature – what is some general mood on the scene? Is it possible (moneywise) to be a full-time writer in Denmark?

There has been a lot of crime fiction pouring out of Denmark, and you could say that “Nordic noir” is part of the Danish writing trend still. Even in the more avant-garde movements. Minimalism is big in Denmark as well and we’ve been blessed with younger generations of really strong women writers. We have some good literary voices these days, I think. Some of the current themes in Danish writing are sorrow, sexuality, madness, autofiction, sci-fi, dystopia – and motherhood! I see an increase in books on motherhood. Good historical novels as well here and there. And good poetry!

You frequently mention the distinctiveness of the Danish language – how do you feel about the process of the translation of your work? Do you think the Lego-like character of the Danish can be transferred into another language without losing your voice or is this versatility of a literary work something you encourage?

I only participate in the translation of the English version (and go slightly over the Norwegian and the Swedish) It is very interesting to see how the English language quite often has a single word that pinpoints the specific meaning of a thing or phenomenon. In Danish, the meaning of the word often depends on the context. We recycle words, you could say. In Danish, my short story collection Karate Chop is called Kantslag which has 4 different meanings in Danish. So, in the translation process we have to pinpoint which meaning it is (but then we of course louse the 3 other shadow-meanings which give Danish that special sense of speaking with more than one tongue). You have to have a very deep insight into the Danish mindset and the Danish language to always get it absolutely right. That is one of the reasons why I spend time on English translations. Then I know I can always advise other translators to have a look at the English version if they’re in doubt. I do find the Danish language very playful to work with, but hey – it’s my mother’s tongue, so it’s the language I know to the core.

The main character in the novel, Sonja, is a middle-aged woman on the verge of disappearance, almost invisible to the society that surrounds her. You are known for writing about people who appear to be on the periphery of what we perceive as interesting – mostly unmarried, childless women. Seeing that one of the reasons we love literary works is because we can find pieces of ourselves in it – and, frankly, most people don’t lead very interesting lives – why are we having so much trouble perceiving those characters as being worthy of our attention?

Oh, this is a big question. I could write a thesis on this topic. First of all. I have written about all kinds of people, also about men and fathers and mothers and lovers and brothers and sister and children, etc. What I tend to write about is human beings in solitude, and specifically in the solitude of their own inner selves. You don’t know how big a social life these characters actually have if you met them in real life. You can’t tell, because inside themselves, in their inner monologues, they will always be alone, and that’s where I tend to show up and say “hello” to them. On the topic of the childless, female protagonist: you haven’t seen her much in the literature (as a protagonist) because literature for centuries was primarily written by men. So, in a traditional setting, she’s always been kept in the shadows. But in society, she’s been around forever! And she’s been quite a strange and powerful character – and also a provocative one – forever! She sends the signal to men that she doesn’t need them. And she sends the signal to other women, that their choices might not be as amazing as they think themselves. She’s a misfit. And I LOVE to write about misfits. Misfits shed a light on “normality” and misfits have the right to think for themselves. Seen from that angle, Sonja is not a sad and lonely character. She’s a rebel! She doesn’t want the lives that other women live – and she doesn’t care about what men think about her. As soon as she gets her hands on that wheel and starts driving on her own, she’s free!

It seems to me that loneliness is a pervading sickness of modern people. Sonja, on the one hand, feels awkward when socializing with other people so she runs away, but on the other hand, her touch deprivation and the need for friendly contact are obvious. It feels like we have all the resources to achieve that connection – why are we lonely then?

I think I answered most of it in the answer above. The social loneliness we feel these days strangely enough might be connected to social media! And also, on certain demands of modern life. I do think that “dislocation” is a bigger theme in my writing than loneliness as such. What the difference is, is quite interesting to investigate, I think: being dislocated from the place you are (because you’re on your phone or because you always long to be somewhere else) will lead to a certain degree of solitude if you don’t observe it. But you know what? I think people have felt lonely and been lonely ALWAYS. I think it’s part of the human experience – and if you have one or two friends to share that human experience with – then you’re a lucky bastard! There’s no place you can feel more alone than with a group of people who don’t want to know you or who can’t make room for you and the misfit you are (and you know what? We’re all misfits). Isn’t that what love is all about, by the way: to be with someone who cares for you just the way you are? These relationships are rare (and they are not likely to be found on Instagram).

Another thing Sonja’s identity is split over is her sense of not belonging. She longs for the places of her childhood, often drifts away to the fields from her memories – she cannot go back, nor can she find peace within the urban environment. Near the end of the novel, while commenting on her vertigo, she says that somehow people learn to live with it. Is that also the case with her nostalgia? Can people make peace with not belonging to one place, or are we destined to yearn?

I think you HAVE to make peace with not belonging to one place, since most of us come from places where we no longer live. Our identities are split between places, between values, between the families we came from and the ones we’re building ourselves. It’s part of the deal. I’m not sure “nostalgia” is the right word for Sonja’s longing. She’s far too aware of the place she came from and she’s not romanticizing it. She’s also stressing that you can’t return to the place you came from. People who are “nostalgic” tend to believe that they can return and if not in person then in their imagination and through longing. But Sonja is seriously geographically dislocated, and she is wondering whether or not it was her own decision to inflict this modern and urbanized identity on herself – or if society decided it for her.

There is a stark contrast between Sonja’s life and those of the characters from the crime novels she translates. In those novels, everything is bombastic, exaggerated, full of gruesome details, and violence, especially towards women. As opposed to that, Sonja’s life seems almost meditative. Would it be too hasty to conclude that Sonja’s view on Gösta Svensson’s novels reflects your view on contemporary commercial literature? Perhaps even your view on culture in general?

Ha ha ha, oh well, yes I think it would be too hasty, and yet again there might be something to dwell upon there. I did translate crime fiction for a while myself and it really can be quite a challenge for your soul, haha. Maybe Sonja just contradicts everything that the entertainment culture craves from us. I like that you find her meditative. I love that you see her as a different kind of human experience. Also – what I learned from being a translator myself, was that the translator gets to know the narrator quite well. I think Sonja’s figured out that Gösta Svensson – this incredibly rich and LOUD crime fiction writer – isn’t a nice person at all. He’s horrible! She has to live with him every day. In her head, in her language, etc. I found that hilarious. That a woman without a man has to live with Gösta Svensson every day. And I also found it interesting what happens when we give someone else the power over our language. She’s allowing Gösta to reach the world through her voice.

Sonja’s lonesomeness feels especially relatable in the context of the Covid-19 pandemic, quarantining, and isolation on social, as well as personal level. In your opinion, how can we overcome this moment in which a touch is deemed as hazardous, and which consequences will this situation bring?

Well, most writers and artists I know couldn’t tell the difference between being in quarantine and just being at work, so I don’t think I’m the right one to ask. I like working alone. I’m an introvert-extrovert personality type. The problem is the extrovert side. I also started missing talking to other people enormously and more than anything I miss traveling to other countries – going places – so much. But let’s face it: Living like we do right now will only be for a while. We can do this. For our neighbours. For our loved ones. And again “being alone” and “being lonely” isn’t the same.

What particularly strikes me as powerful in the novel is Sonja’s ability to observe. In a world that goes around so fast and does not consider patience a virtue, do you think a solitary power to observe and reflect can be helpful when searching for balance in that same crazy world?

Oh, yes! I think there’s an abundance of free entertainment, wisdom, love, horror, and awe in the ability to just observe. Riding on a bus eavesdropping on a conversation right behind you can be pure literature. So, open up your senses! Observe! Take notes! Read the world! Read other people! It’s quite something.