Homepage > English > Interviews > 'It is important to challenge hierarchies both in literature, and in science.'
By: Ivana Dražić

'It is important to challenge hierarchies both in literature, and in science.' 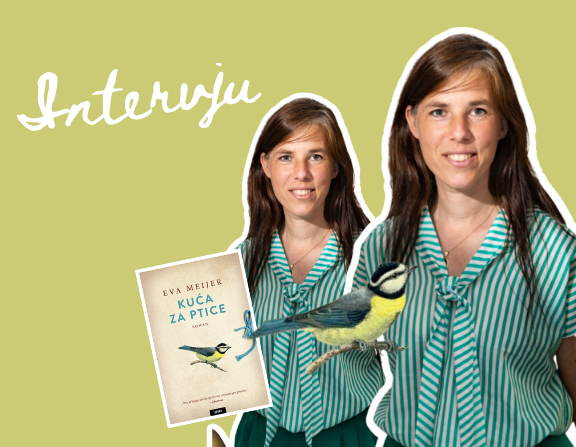 In anticipation of the Zagreb Book Festival, we spoke with writer and philosopher Eva Meijer, author of the novel Kuća za ptice (Naklada Ljevak, 2022, translated from the Dutch by Romana Perečinec), a fictional biography by Gwendolen Howard, eccentric musician, violinist and bird researcher. Eva Meijer, in addition to being a writer, is a philosopher, composer, singer and performer. She is the author of several novels and several philosophical works on language and communication. We talked to her about her professional interest in animals, communication, the novel Kuća za ptice and more.

Much of your professional, literary and philosophical work deals with animals: their communication, language, rights... How did that interest in professional work come about? How did it start?

There are different ways of telling the story. I grew up with animals who were my friends: cats, horses, guinea pigs. They taught me a lot, and it was clear to me that they were thinking and feeling beings. But in our societies and in philosophy this is not really recognized. So I decided to investigate why concepts like language and politics were delineated by excluding other animals, and what counterstories we can tell. Another beginning point is my interest in language. I work as a novelist, philosopher, songwriter, musician, visual artist, and all of these ways of working have their own languages, can express something different about reality. Human languages all have their own scope. And other animals also have many ways of expressing themselves. So investigating what language is and what it does asks for looking at all of these different practices. A third beginning is the injustice that we are inflicting upon others – other animals, but also humans. For me, part of being a good human means resisting injustice and trying to make the world a better place. Acknowledging that other animals are beings with cultures, languages, and complex inner lives, and speaking with other humans about that, is one part of how I work towards that.

How do you percieve the treatment of animals in literature? Is literature as anthropocentric as science? Can you give some examples of good practices?

Someone asked me recently if we can do justice to other animals in novels or poems, or if we are always tied to the human perspective. I think the format of literature gives us a lot of freedom and that the language itself helps us. Writing is always a form of translation: you translate facts, experiences, and so on into a story. Autobiographical writing is a form of fiction, because it picks and chooses; fiction is another way of expressing the truth and what it real. So yes, there is real space to write about, with and for animals. I do think it is important to challenge hierarchies here as in science, because otherwise you simply end up repeating stereotypes.

While preparing for the interview, I found your essay De soldaat was een dolfijn, and part from it is as follows: “Only the prevention of suffering and negative rights (for example, be killed) are not enough. Advocating for animals and speaking for them is not the solution ... ” How to apply this to literature and fiction? How to morally approach writing about animals?

Philosophy approaches reality in an argumentative way, and draws on the ideas of other philosophers to clarify structures, or even lay bare the skeleton behind our experiences. Novels show us the ambiguities of life, and the language can be comforting or disruptive: it is a force in itself, more than in the novels. So I think these are different ways of singing the world, as Merleau-Ponty calls that. I am not sure if we can speak about morality in fiction, but the writer does need to justice to the truth of the story.

In your Guardian interview you said: “People say animals cannot speak. Of course they speak. They speak to us all the time. The only thing is that we don’t really listen. Listening is really important, not just for their sake but for ours because there is a limit on how far we can use the planet and its natural resources.” Are we neglecting the subversive potential of listening? Do we listen to each other too little?

Due to the types of media we use to learn about the world and communicate with others, there is a strong emphasis on speaking. The same is true for much of political debate and the public debate. Listening can be an antidote to this monological tendency, not just with regard to animals, but also other humans. In a dialogue we need to listen, and we need more dialogues. Listening is an important skill for individuals, to know your own position, but also as societies we should listen much more to others – including the other animals and the natural world.

Het vogelhuis (Kuća za ptice) is a fictionalized biography of Len Howard, a musician, writer, researcher and bird lover from 1930s, who left her music career to dedicate her life to study of birds. What exactly attracted you to Len's life and how did you approach writing a fictionalized biography? What are the challenges of this form, if there are any? What drew you to birds exactly?

In my philosophical research I came across the books of Len Howard, and suddenly understood I had to write a novel about her. The novels always suddenly come to me, like a vision. Howard is a good protagonist, because she followed her own path, encountered resistance as a woman, and stayed true to her own self. She decided to study wild songbirds, opened the windows of her house, and they became her friends. She got to know them intimately through living with them – their friendships, love lives, personalities, and they got to know her.

I decided to write a novel and not a biography because I wanted to write about the emotional reality of what it means to share one’s life with other animals, in this case birds. I wanted to do real justice to Howard’s voice – that I got to know from her own books – but little was known about her life, so it is really fiction. I contrast the human story with the bird stories, to expose something about life. Birds do not live as long as humans, but they have full lives: they love others, lose them, try to make something of it. This shows us something about how fragile life is, how short we are here, but that there is also the cycle of new life returning, like the seasons. Humans and birds are not so different, if you look at what counts.

It seems to me that one of the premises of the book is the impossibility of interpersonal communication and understanding. It is especially interesting in this day and age when „communication” is everywhere, but, it seems to me, we lack understanding more than ever. Can a return to nature help us understand each other, and how?

I think for me it is the opposite. There is so much communication and understanding going on in the book: through music, human language, between birds, between birds and a human, between the text and the readers: all of us are continually creating meaning in so many ways, the whole world is alive.