Homepage > English > Articles > The kind of film that follows you home

The kind of film that follows you home 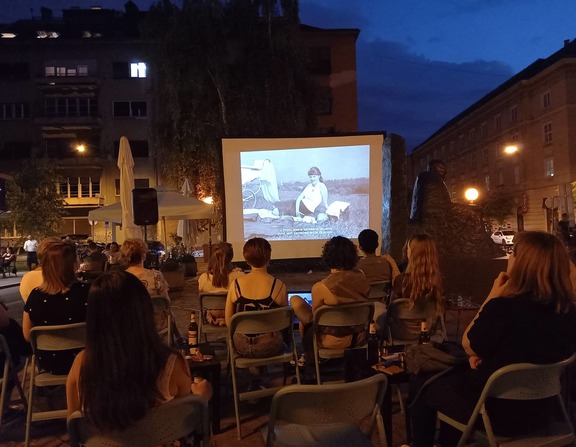 This feature was produced in collaboration with European Center for the Study of War and Peace. It was written by Olivia Rose.

On a warm summer evening in Zagreb, audience members from near and far —from Split to San Francisco— occupied nearly every seat set up outside the front of Booksa in anticipation of the last event for the day: a documentary screening of Sylvia Plath: Inside the Bell Jar.

Once the sun set behind the buildings surrounding the park, the film began. A blanket of decorum engulfed the gathered viewers.

In front of the audience, a large white movie screen just taller than its neighboring monument to writer fra Grgo Martić reflected a projection of the 2018 documentary. Directed by Teresa Griffiths, the film depicts a brilliant and chilling testimony of the late Sylvia Plath, a renowned female poet and author.

The documentary framed Plath's personal narrative in her semi-autobiographical book, The Bell Jar, through excerpts and interviews with people familiar with her story —scholars, friends and her daughter, among such interviewees. Additional context provided about the societal structure of the 1950s United States substantiated the poet's perspective about the challenges of womanhood during that era and allowed a more authentic depiction for viewers to understand.

The seminal novel covers six months in an intelligent young woman's life with a startling account of 'normalcy' in the 1950s. The story begins in New York with its protagonist, Esther Greenwood, working for a fashion magazine's college-editorial board. She wrestles with the pressures of conforming to the traditional role of a woman in her position or breaking out from that tradition's bindings; the mental strain catalyzes her declining mental health, resulting in a suicidal breakdown. The story ends with Esther emerging from a mental health institution after recovery.

Plath wrote Esther in reflection about her younger self; her story was a mirrored image of the one bound by words. Witty and disturbing, the book is a story about Plath coming to terms with herself. But the haunting difference between the author and her character was that only one survived in the end.

Inside the Bell Jar unveiled devastating parallels between the female author and her work over the course of this documentary's hour-long run-time.

"It was a queer sultry summer, the summer they electrocuted the Rosenbergs, and I didn't know what I was doing in New York," the film echoed Plath's words for the first time, giving breath to the opening lines of her novel. "I'm stupid about executions. The idea of being electrocuted makes me sick…."

The protagonist's thoughts in the book synonymous with Plath's own, she wondered how terrible it must feel to experience such a thing as electrocution —how it had to be the worst pain in the world. She would come to learn that pain all too well. Plath received electroshock therapy after a 'breakdown' and expressed how awful the experience was through Esther's narration: "I wondered what terrible thing it was that I had done."

Bystanders of the event lingered, derailed from their 'a to b' by the voice resounding through the single speaker adjacent to the screen.

Maggie Gyllenhaal narrates the written voice of Plath throughout the film using excerpts drawn from her letters, journal entries and The Bell Jar. Cynicism coincides with wit and charm in this performance; Gyllenhaal's cadence in her narration brilliantly represents Plath's narrative voice. The delivery of her complex character made the film all the more compelling. Plath's words demanded attention.

The story engrossed the full attention of event attendees; only occasional whispers to neighbors interrupted the scenes. Now, decades after her death, Plath continued to captivate the admiration of people across the globe.

Acknowledging the story of Esther Greenwood, it was no secret that Plath manifested signs of severe mental health issues. However, because of the extreme stigmatization in the 50s, people in the United States seldom discussed mental health. As Plath spiraled on the inside, her distress went unchecked by those around her; she attempted suicide, an incident detailed in her only novel.

"I had no idea that there were strains in her life, and I did not see anything but the smile on her face and the magenta lipstick," said Laurie Glazer in the documentary; she knew Plath from their time together in New York working at the Mademoiselle. Pictures of Plath flashing a contagious smile filled the screen: "Maybe she was a marvelous actress."

She was intelligent, ambitious and bridged cynicism with a smile, but the inner turmoil and self-doubt engulfed Sylvia Plath. Just four weeks after The Bell Jar was published in 1963, Plath took her own life. She died at 30, shortly before the world came to recognize the overwhelming profoundness of her seminal novel.

Over a half-century later, Sylvia Plath's work remains strikingly relevant to the testimony of women's liberty in modern-day America. Watching Inside the Bell Jar explore the parallels between Plath and her literary work presents an opportunity to note an additional analog between the depictions of womanhood in 1950s America and the present-day rights of women in the United States. Vivid and thought-provoking, it was the kind of narrative that stirs something deep inside —revealing modern parallels to similar predicaments.

"This condition of women at the time, I found, was very well represented in 'The Bell Jar' by Sylvia's kind of wavering between trying to decide which man should seduce her and the necessity of getting married," Melvin Woody, a friend of the poet, said. Plath's writings made it clear that she envied the freedom men had from societal standards.

"[Sylvia] reminded me of the facts of life from a woman's point of view. And, of course, all of this was before the pill, which changed everything for women."

In the fifties, women did not have the same sexual freedoms as men in that era. Women practiced chastity and guarded their virginity because pregnancy was a legitimate possibility. Becoming pregnant threatened a woman's career —a valid concern.

"'You couldn't work and have children," Glazer said. "When I first got pregnant, I ran into my office, it was a newspaper, and I said, 'I'm pregnant!' And the man in front of me said, 'You're fired,'" she paused for a moment, "That was the 50s."

A heavy exhale sounded from the audience.

Even with the significant progress made since the 1950s, women in the United States continue to face similar issues alongside increasing threats to their fundamental rights. The U.S. is the only developed country in the world without guaranteed national paid parental leave; pregnancy and parenthood jeopardize careers and financial security. Employers in the U.S. are required to grant 12 weeks of unpaid family leave after the birth or adoption of a child; there is zero required paid maternity leave in the U.S. —whereas in Croatia, paid maternity leave lasts until the baby is six months old. The female poet's testimony gives way to the latest overturning of Roe v. Wade and nationwide protests centered on female reproductive rights erupting across the U.S. in 2022.

Inside the Bell Jar is the kind of film that follows you home. The story haunts viewers with the gravity of Plath's life, death and everything in between.

When the documentary ended, the crowd remained silent while the brief credits rolled; not a single person left their turquoise chair or red stool until they were certain it was over. Booksa staff turned the projection off, and a rush of liveliness overcame the group as they exchanged gratitude, comments, conversations and cigarettes.