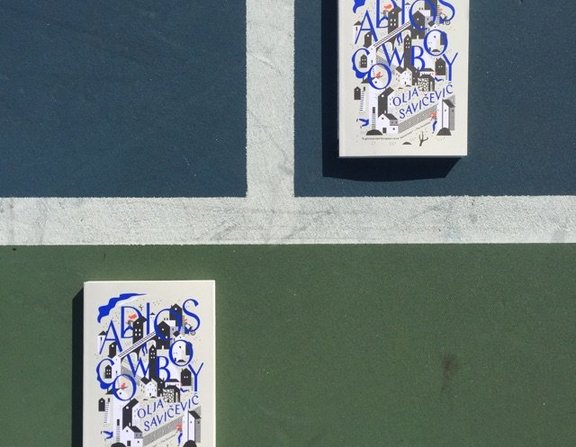 This feature was produced in collaboration with European Center for the Study of War and Peace. It was written by Olivia Rose.

After learning of a chance to uncover the truth about her brother’s suicide, a haunted young journalist and university drop-out named Dada abandons her life in Zagreb and returns home to a coastal town in Dalmatia called Old Settlement. Her mind falls in a sporadic loop as she reflects upon the deaths of her brother Daniel and her father, her upbringing and failed attempt to escape a town that swallows up any shot of success. Grief, grit, the shoes of dead men left out of the steps and, of course, cowboys — Olja Savičević's 2010 debut novel Adios, Cowboy (published by Algoritam) shares the unusual story of Dada’s pursuit of answers and overcoming loss.

From Split, Croatia, the author gives readers of Adios, Cowboy vivid insight into life set in a dusty Dalmatian town with this display of prize-earning prose and poetic imagery. Savičević is a decorated poet, writer, and journalist whose award-winning works have been translated into more than 17 languages. This English edition, translated by Celia Hawkesworth, was published in 2016.

Having returned to Old Settlement, Dada must share the responsibility of caring for her mother, who is addicted to pharmaceuticals, with her chain-smoking older sister. Dada is jaded yet plucky; she shares a bitterly honest, sharp tongue in common with her sister. A fiery attitude complements her ginger hair —a quality she shared with Daniel, who leapt from a cement overpass and under an express train when he was 18. Daniel was sociable, but became involved with the wrong crowd after Dada left for Zagreb. With Daniel’s key, the local gang assaulted Daniel’s neighbor and friend, Professor Karlo Šain, in an incident that later resulted in either the disappearance or death for those involved, the details spared of by Savičević. Herr Professor, Karlo Šain —the neighbor, the vet, the grown man who befriended her young brother, who vanished months before his death— has now returned back to Old Settlement. The mysterious circumstances of Daniel's death four years earlier left Dada with unresolved business and a single question for her neighbor who was nowhere to be found —until now.
But even in a familiar place, the protagonist is lost in more ways than one. Dada left Zagreb behind as "the most faraway city on earth" and is certain she will never return. She has a deep-seated aversion for where she has been and a burdensome pain clouding her present. In the Old Settlement, Dada struggles in the space between change and the unchanging. She sleeps beneath Daniel's fading cowboy posters, an interest taken after their father, and wanders throughout the town on a mission to piece together the fragments of the past. Eccentric characters —many now in the ground— are recalled in detail as Dada remembers the streets they were raised on and visits former places of significance. Dada's perspective, narrative and tone share elements of resentment and cynicism as she restlessly ruminates her relationship to the people and place surrounding her, failing to free herself from the gravity of her past.

The Old Settlement is a town with a structure that rarely changes. Like anyone returning to their small hometown after a long time away might experience, Dada notices the stark difference between what has changed and what fractions of the past remain intact in the Settlement. Readers wander through the area with Dada as she remembers the intricacies to each part of town. She describes this place through glimpses of past contrast to present, telling a story while showing what it is like now. Still, Dada finds that an influx of tourism to the west of her town, in Split, made everything seem like it had "changed faster and more fundamentally than I had. I must have spent the last few years standing still on a conveyor belt while everything else was rushing and growing." Yet in the east industrial zone, which she describes as "a great stranded wreck," much more has been preserved. "Here, nothing has changed; it hasn't budged. Perhaps this is the only corner of the world I know, my haven, my salvation, my place of greater safety. Despair and refuge, a shred of happiness in a lukewarm bitter liquid." This is where Dada finds familiarity and where her pursuit of resolution takes place. This is also an impressive example of the author’s skillful storytelling.

Mentions of wartime provide sharp detail; rotting architecture and fading graffiti inscriptions that have become local toponyms mark this vivid account of postwar Croatia. “In former times, the lads from the Old Settlement who were going off to the Yugoslav National Army used to write their names on the walls of their houses, their date of birth and year they were called up. And they added some well-known lines of verse. At the bus station was written WAIT FOR ME SELENA from some song or other… By now the words have been largely washed away by rain and sun—people are beginning to forget why the building with shutters the color of cornflowers, near the bus station, is called Selena.”

Reading Dada's journey through past, present and other, it is noticeable that Savičević wrote poetry before she wrote this novel. The imagery honest and characters comprehensive, descriptions of Dada's hometown paint a picture that only grows in detail. Savičević builds a layered narrative with a combination of uncomfortable and poetic language that suggests the author's more profound sense of familiarity with places like the Old Settlement. Seemingly insignificant mentions with in-depth descriptions, like shoes on the steps or a poster that says “JESUS LOVES YOU” on the side of the motorway, are later found as subliminal points of reference which slip from the reader's attention until they become significant in a later context. Savičević does not fall short of articulate in this way, despite the indistinct sequence of events that take place in Adios, Cowboy.

Readers gain insight into Dada’s life through this scattered account of memory recall. She speaks of memory like recording tape that “rolls forward and backwards. Fw-stop-rew-stop-rec-play-stop, it stops at important places, some images flicker dimly frozen in a permanent pause, unclear." Readers can find that the narrative of Adios, Cowboy runs much like this —abrupt shifts from past to present, literal and hypothetical happenings of uneven pace and nature with pause, fast forward, rewind and play. For example, at one moment, she is skinning scalded tomatoes with her mother, and in the following segment, she details the day of Daniel's death. These shifts vary in quality, from being strikingly sudden or nearly indistinguishable from the current storyline. Importantly, however, this way of peering behind the curtain of her memory gives insight into Dada's conscience, revealing the complexities of her character throughout the novel.

And this is just the thing about Adios, Cowboy: There is no single chronological thread. Instead, the plot consists of a tangled webbing of flashbacks and memories and present-tense narration; because of this, the story may be confusing for many readers to make structural sense of. But while this unconventional formatting may be perplexing, it should not take away from the brilliance of Savičević's composition. I often found myself questioning the relevance of particular parts of Dada's story: why on earth did I need to read about a scarring screening of amateur porn, I thought, why is she going so into detail on this thing about shoes —only to find out later precisely why the strange assortment of at-first nonsensical pieces and depictions were worth the pages of poetic and often jarring description. I did not understand the remarkable storytelling device that Savičević was employing until the unsymmetrical strings of obscure and tangential plots began to knot together in a messy but captivating ball of twisted and tied-up thread. The importance of the random ramblings finally made sense in the latter portion of the book, as always is with great writing.

Every character, except for maybe Jill the cat, is flawed; both internal and external dialogue causally involves outdated terms, slurs and stereotypes in reference to mental illnesses, race and sexuality. Albeit rough, this quality makes the developing characterization more realistic. Savičević represents a particular makeup of Dalmatia in this novel with a notable intensity prioritized over the likability of characters. This is prevalent in the novel's cowboy theme alongside the permeating social issues where, for instance, "the advent of the war had a way of making people's ethnicity everybody's business," which airs an ‘us versus them’ theme in the novel. The western-centric movies and childhood games were significant to Dada, her father and her brother; a generation marked by war played “cowboys and Indians” as a childhood diversion from the conflict in reality. Significantly, when a famous cowboy actor Ned Montgomery —the man featured on Daniel’s old poster hanging above Dada’s bed— brings the film set to the Old Settlement, the entire town seems to be overcome by the western theme. It is up for interpretation whether the stereotypical 'us versus them' standoff featured in these old cowboy movies is meant to, not mirror, but perhaps echo what happened in Yugoslavia during the 90s. Moreover, the cowboy movie filmmaking plot darkens the book's fast-paced and dramatic conclusion, including a climactic showdown between the fake cowboys and one of the eccentric villagers.

By the end of the novel, the circumstances surrounding Daniel's death are finally clarified to Dada. However, the protagonist found one truth while unknowingly lost sight of another, and readers depart from the story with knowledge of something she does not —now becoming the ones haunted by the truth. The ending serves as a reminder that cowboys are fantasy, and no hero is riding into town on a white horse. Dada's testament shows that sometimes, you must ride off into the sunset yourself —not to escape, but because the story has come to a close.

“There’s nothing, that’s the worst of it.
Everything’s the opposite of what it seems: hell is a comfort to the living, while heaven is ordinary blackmail.”

Strange and unsettling, poetic and imaginative, confusing but captivating: Adios, Cowboy was named the best Croatian novel of 2010 (tportal's prize). The nonsense and poetry combined with Dada's introspective account of the world around her make this story a deeply engaging read. This book is interesting, unusual, and unique; it resists the constraints of expectation and keeps readers in a fog on their toes, sharing Dada's quest for closure.